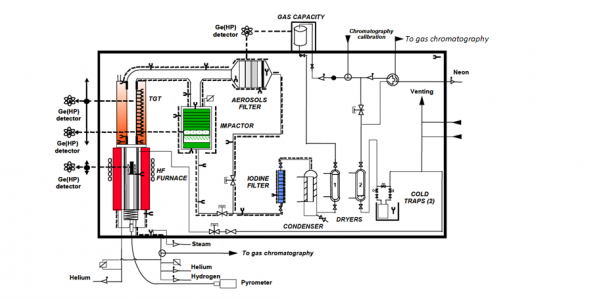 The VERCORS programme, which involves tests with short fuel-rod samples, has proved to be a rich source of information regarding FP release and tranport.

The first tests were the HEVA series conducted between 1983 and 1989 where, with maximum temperatures restricted to 2100K, the main objective was to generate information on release of volatile FPs from UO2 fuel. Between 1989 and 1996, the tests VERCORS 1 to 6 were conducted with an improved apparatus and fuel temperatures up to 2600K, i.e., higher than those in HEVA so as to expand assessment of release to lower volatility FPs and begin to address issues of UO2 fuel degradation. The apparatus also allowed, to a limited extent, investigation of FP transport.

Between 1996 and 2002, the test series VERCORS HT and RT were performed where the main intention was to improve the database with respect to transport aspects and FP release during later accident phases, i.e., encompassing highly-degraded fuel states (debris, liquefaction). The effect of other parameters on FP release was also studied, notably the influence of high fuel burn-up (up to 70GWd/tU) and mixed-oxide fuel (MOX). The particularity of the RT series was the simplification of the apparatus downstream of the crucible allowing better quantification of low-level releases. Eight RT tests were performed in a variety of atmospheres, namely pure hydrogen, steam-hydrogen mixtures and one test with a helium-air mixture. The particularity of the HT tests was that they included a well-characterized transport system downstream of the crucible allowing deposition and sampling measurements to be made. This series comprised three complementary tests covering the full range of H2-H2O atmospheres with and without the presence of control-rod elements (Ag-In-Cd-B) in order to assess their effect on FP retention.

All six VERCORS tests, most of the VERCORS RT tests and all three HT tests included low- power re-irradiation of the fuel sample in an experimental reactor for a week to re-create the short half-life FP inventory. This allowed the measurement of lower volatility FPs to be considerably enriched. Furthermore, all except three of these tests were conducted with an intermediate temperature plateau (1500K or 1800K) lasting one hour such that full oxidation of the cladding occurred and early sample liquefaction was precluded.

IRSN has for some time been using its computer codes to analyse the results of the VERCORS tests. These codes are the mechanistic release code MFPR [2,3], the simplified release code ELSA [4] (a module of the integral code ASTEC [5]) and the transport code SOPHAEROS [6] (also a module of ASTEC). Regarding the study of FP release, the focus of this work has been on VERCORS 4 and 5 as well as some of the RT tests. In particular, the detailed interpretation made possible with the MFPR code is shedding light on how the oxidation state of the fuel affects the FP chemistry modifying the different fuel phases. Most notably, it is currently thought that the FP Mo, often considered a main component of metallic inclusions during reactor operations, acts to a certain extent as an oxygen buffer (by forming MoO2) with respect to other FPs, i.e., playing a key regulatory role in the chemical forms of the FPs, especially Cs, and hence their volatility and release [7]. With respect to FP transport, the HT tests represent the major interest. Currently, full results of the HT1 test have been available for some time; those of HT3 have just recently been finalized while HT2 was performed in 2002 and results are still awaited. Hence, interpretation of the transport results is, as yet, preliminary [8]. In general terms, it is seen that the usual release categories of volatile, semi-volatile and low volatility FPs can be quite misleading during transport since behaviour can change radically as a function of the in-fuel and ex-fuel differences. One particular point of interest concerns the distinctive difference in behaviour between caesium and iodine where iodine seems to exhibit volatile behaviour whatever the conditions while Cs tends towards different levels of intermediate volatility depending on the reactive species present (molybdenum, boron, etc.). Another aspect being investigated is the conditions leading to significant deposition of so-called semi-volatile FPs (Ba, Mo, Ru, etc.) close to their point of release.
Facility is dismanteled, replaced by VERDON.