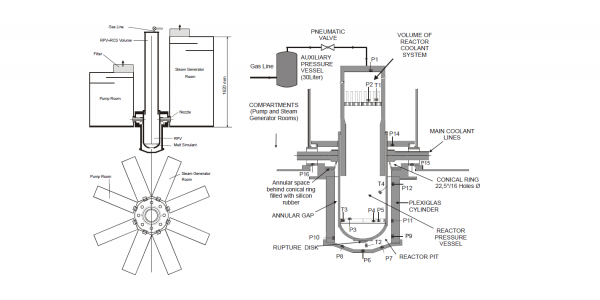 The DISCO-C facility serves to investigate melt dispersal from the reactor pit when the reactor pressure vessel lower head fails at low system pressure of less than 2 MPa. The fluid dynamics of the dispersion process is studied using model fluids, water or bismuth alloy instead of corium, and nitrogen or helium instead of steam. The effects of different breach sizes and locations, and different failure pressures on the dispersion can be studied.

The cavity, a Plexiglas cylinder with an inner diameter of 342 mm, is attached to the vessel support structure. Generally, the flow path out of the reactor pit is through the annular gap between reactor vessel and cavity wall and along the main cooling lines into the pump and steam generator compartments. There is the option of a flow path through holes straight up into the containment, that is modeled by an extra cylindrical compartment.

The compartments, eight boxes which model in volume the steam generator and pump rooms (0.3 m³ and 0.131 m³ each respectively), are connected to the nozzles, and are placed on the vessel support structure around the RPV. They are covered by filters on their tops for the extraction of fog and drops. Two boxes have one Plexiglas wall each, to permit optical access for flow visualization.

The following failure modes of the lower head were studied: central holes and three types of lateral breaches: lateral holes, a horizontal slot, and complete ripping and tilting of the lower head. The horizontal slot models a partial rip in the lower head, as it might occur with a sidepeaked heat flux distribution. The flow cross section is equivalent to a 25 mm hole. The fluids employed were water or a bismuth alloy (similar to Wood’s metal) instead of corium, and nitrogen or helium instead of steam. Most experiments were performed for the combination water/nitrogen, with 3.410-3 m3 of water. With central holes four hole sizes, 15, 25, 50 and 100 mm diameter (scaled 0.27 m – 1.80 m), were investigated, each at three initial pressures, 0.35, 0.6 and 1.1 MPa. Nitrogen/metal tests were performed with the 25 and the 50-mm-hole at 0.6 and 1.1 MPa with 3.310-3 m3 of metal. Some tests (25 and 50 mm hole size) were performed with 1.810-3 m3 of water and were repeated several times. The reproducibility was very good.
Facility is in operation.