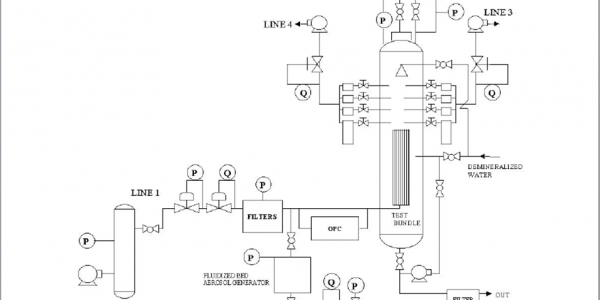 The separate effect studies of vertical steam generators have been conducted in the CIEMAT PECA facility, which was properly modified and conditioned for that purpose. The PECA facility set-up used in the SGTR separate effect tests basically consists of:
1. Two injection lines, one designed for supplying air at relatively high flow rates from a compressor, and the other for the aerosol injection.
2. The vessel, containing the tube mini-bundle.
3. The associated instrumentation and sampling stations.

Steam generator reliability and performance are serious concerns in the operation of pressurized water reactors. The aim of the SGTR project was to provide a database of fission product retention in steam generator tube rupture sequences and models, which could be applied to estimate the effectiveness of different accident management strategies in these kind of accidents.
The SGTR project made an important step forward to resolve uncertainties of physical models, especially in the aerosol deposition and mechanical resuspension in turbulent flows. There was one sampling at the injection line for the Optical Particle Counter (OPC) aimed at determining the aerosol size distribution and quantifying the mass concentration at the inlet. Within the vessel atmosphere eight samplings were taken to six filters and two cascade impactors, from which the mass concentration exiting the tube mini-bundle was estimated.
The test mini-bundle is a scaled mock-up of the first stage of the steam generator tube bundle. It consists of a squared arrangement housing inside a total of 117 tubes plus four supporting rods placed in the corners. The mini-bundle allows two possible locations of the broken tube. One place is just at the centre of the structure and the other place is three tubes away from the centre.